I was recently gifted a smoker from my awesome Prairie Dev Con speakers – an electric Bradley 4 rack smoker! Upon reading the instructions, I realized that due to the "electronic" nature of the device, it can't just be left outside to the elements like a BBQ can. So I started looking around at custom enclosures people were building and got some ideas. Now, I'm not what you would call a handy-man type of guy. I didn't grow up doing carpentry projects or working on cars or anything like that, but regardless yesterday I built it. Here's what it looks like (still needs stain and one more piece of plywood for the back)… 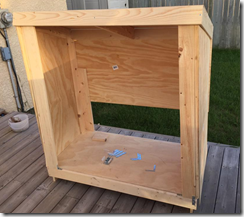 The experience was fantastic – I had my daughters help me with most of the construction, so we were able to make this a quality-time project building something together. I also got to use some tools I received as an office Christmas gift from years back that I hadn't before. And I learned a lot – even though I know there are things I would have done differently in retrospect, and things I know I'd like to tweak with it even after its "finished", it was a fantastic learning experience.

I was really encouraged at Prairie Dev Con earlier this month in Regina. We had a number of hands-on-labs that were very well attended and I was in awe of how willingly people were to jump in and try something hands on that's new to them. This 'makers' movement in the IoT space, and also people willing to learn new ways of doing web development (as one commenter put it "ready to start using new skills at work right away!") was really exciting to see. And it inspired me to "make" more.

I've been scared at times to try something new – actually it wasn't even the "starting", but more of the possible failing. I don't know if its a case of imposter syndrome or not wanting to come across as being inept or what. But the first step, the first movement on a journey, can be the beginning of something awesome. The positive What If as opposed to the negative. The possibilities instead of the pitfalls. The rewards instead of the costs.

One thing I've learned is that the true feeling of success doesn't come from outside, but from within. That feeling of accomplishment that you receive when you complete something – even if that something isn't 100% perfect. I approached the enclosure project like an agile software project – this was iteration 1, done in a day, and with a retrospective of what I'd have done differently next time. And its functional, which is great because I want to start smoking some meat. :)

I feel like I'm rambling a bit – look, here's the thing. MAKE STUFF. BUILD STUFF. EXPERIMENT WITH STUFF. Don't allow external pressures or fears of "Am I good enough", "Will I be accepted?", "Doesn't anything I do need to be perfect?", and their ilk ruin your ability to have new experiences, in life or at work.

In a few weeks I'll be starting on a new adventure. I'll be working with a new team, in a new domain, on systems that are new to me. And I'm excited, even with all the unknowns, because I can't wait to see what I can help build with my colleagues. I never want those nagging, negative "What Ifs" to get in the way of what's possible.